Hey readers, I’m delighted to introduce another guest writer to you. This is Dylan Matthews, a staff member at CSF. Fun fact: remember that Flannery O’Connor mug that I bought for a friend but he already owned it? This is the friend.
Thanks, Derek


Hey everyone! I decided to bring back the mug as proof. Thanks for the almost-gift DK, it’s the thought that counts. Also, check out Wise Blood (below), Flannery O’Connor’s first novel. It’s one of my favorites. And it’s a good movie too, directed by one of the greats, John Huston. Anyways, enough book and movie nerdery. Let’s talk about the bible. 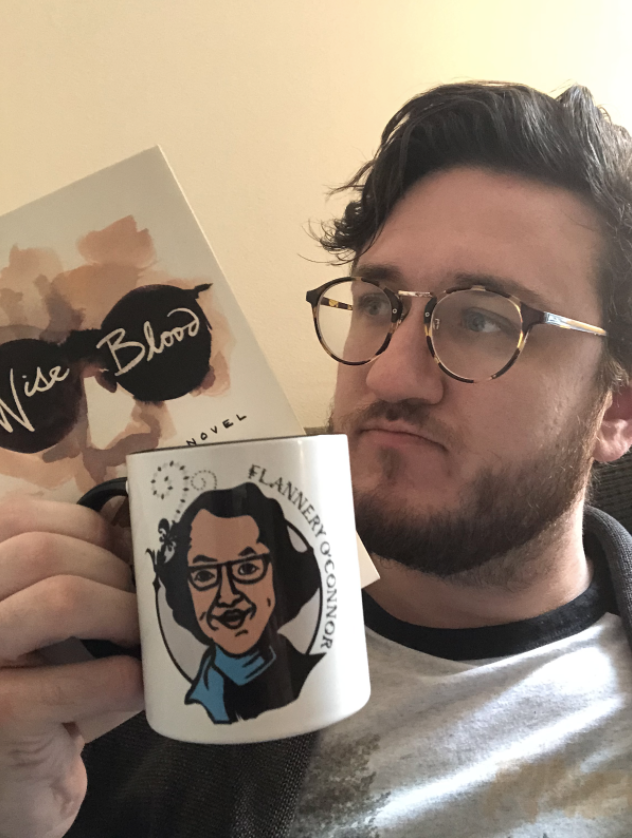 I know this may not be the happiest of Easter seasons, but still I think it’s important to celebrate! It’s easy in tough circumstances, like covid-19 quarantine, to be grumpy and ignore something like celebration. But as we’ve seen in this letter, Paul has every reason to be grumpy – i mean, he’s in prison while he’s composing this letter – and yet his letter is filled with joy, and he calls us to be joyful with him. Let’s read.

14 Do everything without grumbling or arguing, 15 so that you may become blameless and pure, “children of God without fault in a warped and crooked generation.” Then you will shine among them like stars in the sky 16 as you hold firmly to the word of life. And then I will be able to boast on the day of Christ that I did not run or labor in vain. 17 But even if I am being poured out like a drink offering on the sacrifice and service coming from your faith, I am glad and rejoice with all of you. 18 So you too should be glad and rejoice with me.

Because before Paul was a Christian, he was a Pharisee, a religiously conservative Jew.

You may be asking, “Ugh…why does this stuff matter?”

Great question! But quit grumbling. I’m getting there.

What I’m trying to say is Paul really, really knew the Old Testament. He had huge portions of it memorized. He meditated on it constantly. And more than that, he saw the whole world through the story of the Old Testament.

So every time Paul wrote a letter to one of the early churches, he had a story in the back of his mind. The story of God and his people. The story of Yahweh and Israel. The story of the God who made a promise to the children of Abraham that through them he would save them from their sins, from exile and be a blessing to the whole world.

The story of the Old Testament.

But here’s the difference between the Old and New. Paul saw that the hope of the Old Testament had become the joy of the New Testament. As N.T. Wright puts it, “What Israel believed God would do at the end of history, God had done through Jesus in the middle of history.”

Paul see’s what Jesus has done, is doing and will do in light of all the promises and stories of the Old Testament. And he sees us, christians, as the new expression of the covenant people of God.

When Paul says, “do everything without grumbling or arguing,” what story from Israel’s history is he thinking of?

1Then all the Israelites left Elim. They reached the western Sinai desert, between Elim and Mount Sinai, on the 15th day of the second month after leaving Egypt. 2Then the whole community of Israelites began complaining again. They complained to Moses and Aaron in the desert. 3They said, “It would have been better if the Lord had just killed us in the land of Egypt. At least there we had plenty to eat. We had all the food we needed. But now you have brought us out here into this desert to make us all die from hunger.”

In this passage, you may know it, the Israelites have been led out of slavery and are in the wilderness moving towards the “promised land.” But they start GRUMBLING! They start complaining that they’re lives were better as slaves! You’d think God’s special nation would be a little more grateful for their freedom…

Now back to Philippians.

Paul is looking at the Philippians and saying, “What God did once by setting the Israelites free from Egypt, he has done in a greater way in Jesus by setting us free from sin. Therefore, don’t be like the Israelites in the wilderness. Don’t be grumblers. Instead, let us live as God’s covenant people, rejoicing through all circumstances for He has kept his promise, he has set us free and we await the day where he will make all things new. Until then, let’s rejoice”

In other words, don’t be Señor Chang.


P.S. Community is on netflix now and it’s one of my favorite TV shows ever and you should watch it. Kbye.