Hi, all! As much as I enjoy my morning cup of coffee and/or tea, I try to take at least one day off per week. I had a mini caffeine addiction in college when I was drinking coffee every day and would get headaches without coffee. So today, it’s just water for me… 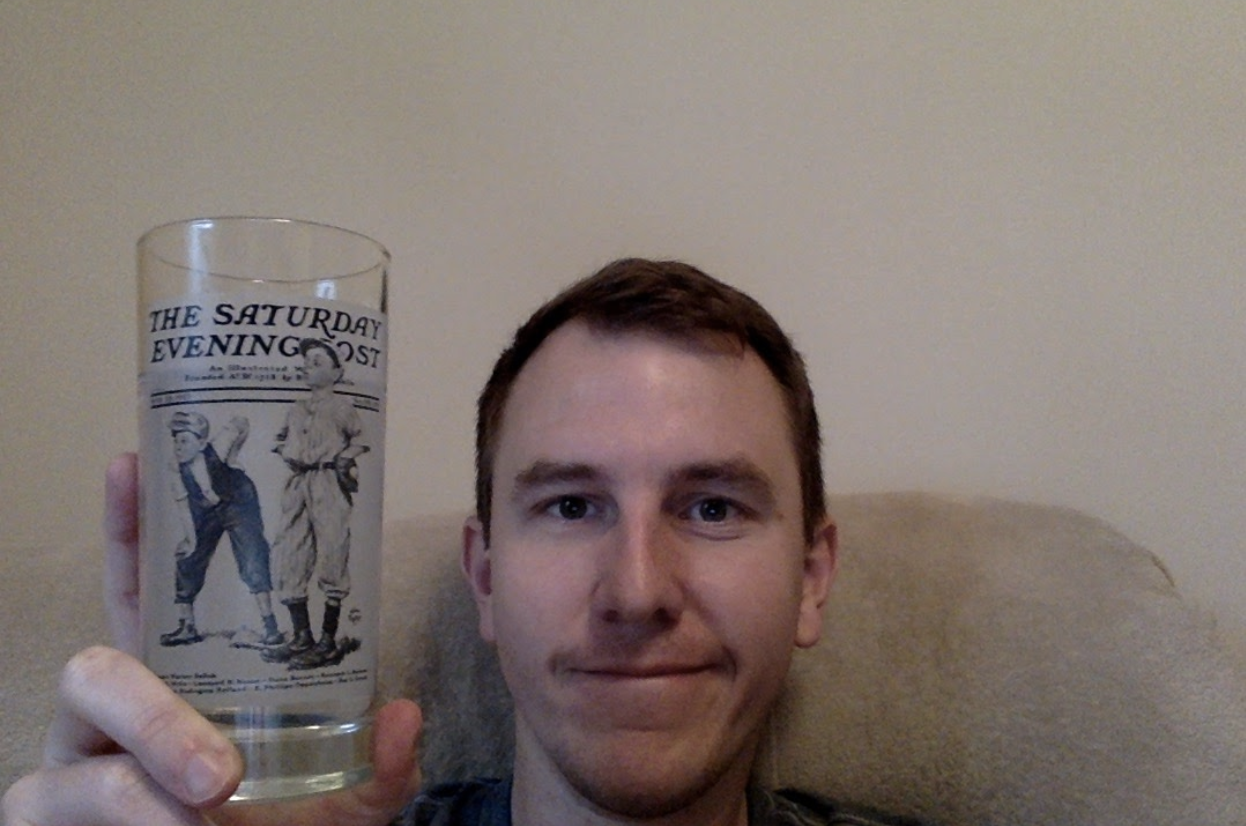 I do enjoy this glass, though. The Saturday Evening Post was a famous magazine from the ‘20s through ‘60s (per Wikipedia). They featured lots of cool drawings on their covers, particularly baseball ones. I’m a big baseball fan, and I’m definitely missing watching games during lockdown.


I hope in the Lord Jesus to send Timothy to you soon, so that I may be cheered by news of you. 20 I have no one like him who will be genuinely concerned for your welfare. 21 All of them are seeking their own interests, not those of Jesus Christ. 22 But Timothy’s worth you know, how like a son with a father he has served with me in the work of the gospel. 23 I hope therefore to send him as soon as I see how things go with me; 24 and I trust in the Lord that I will also come soon.

25 Still, I think it necessary to send to you Epaphroditus—my brother and co-worker and fellow soldier, your messenger and minister to my need; 26 for he has been longing for all of you, and has been distressed because you heard that he was ill. 27 He was indeed so ill that he nearly died. But God had mercy on him, and not only on him but on me also, so that I would not have one sorrow after another. 28 I am the more eager to send him, therefore, in order that you may rejoice at seeing him again, and that I may be less anxious. 29 Welcome him then in the Lord with all joy, and honor such people, 30 because he came close to death for the work of Christ, risking his life to make up for those services that you could not give me.


Sometimes when we read the Bible, we get this idea that it’s dropped down from heaven on golden tablets. Some people have the idea, or at least read the Bible like they have it, that instead of individual books we should just print the whole thing and stamp on the cover: “Author: God.”

But then we run into a passage like this one.

This is not to suggest that this passage is any less divinely inspired or can’t speak personally to us today, but it does remind us of the humanness of the Bible. It reminds us that this letter is Paul’s, and that Paul, more than just a mouthpiece of God, was a real person. He had hopes, dreams, disappointments, and…friends.

These might seem like passages we can just skim over—”there’s no moral here!”—but in reality we can learn a lot about God and our own lives from the lives of others. Elsewhere, Paul says “Imitate me as I imitate Christ” (1 Corinthians 11:1). Passages like this one are little glimpses into Paul’s imitation of Christ.

While preparing for this section, I came across N. T. Wright’s comments on the passage in his New Testament for Everyone series. These commentaries are nice because they are almost sermonic-like reflections on the passages of Scripture. Today, I thought I would post this one. Although it’s a little long, it really helped me understand this passage—and see myself in it.


When I was at school a first-year physics teacher once asked us the question in an examination: What are the advantages of having two eyes?

The correct answer, of course, was that with two eyes you can see things in three dimensions, and learn to judge distances, speeds and so on. One boy, however, wrote as his answer: ‘Having two eyes means that you can see twice as far; and if one eye stops working you’ve always got the other one to fall back on!’

The teacher enjoyed this so much that he read it out to the class as a fine example of making up in ingenuity for what you lack in information. But of course the true answer remains important: with only one eye you don’t get things in their proper perspective. You need two if you’re to see them with all three dimensions.

The little paragraphs about Timothy and, now, Epaphroditus are enormously important in helping us to get Paul and his work — and his feelings and emotions — in true perspective. If all Paul’s writing was solid, dense, abstract theology we would never have known what he was really like as a human being.

Indeed, we might have had the idea that Paul lived the kind of Christian life one imagines from some popular literature: a life without stress or strain, a life of pure unmitigated joy and gladness, cheerfully doing the work of the Lord and preaching the gospel without a care in the world. Worry? Why, wasn’t that sinful? Human anxieties? Why couldn’t he submit them to the Lord and forget about them? Doesn’t he say, in chapter 4 of this very letter, that you should rejoice at all times, commit everything to God in prayer, and know his peace which passes understanding?

Yes, he does, and that is important. But the present passage enables us to take a two-eyed look at all of this; to see in three dimensions what this joy really is — and what it isn’t. The passage gives us a window not only on Epaphroditus — his journeys, his mission, and his nearly fatal illness — but also on Paul. He was truly glad to have Epaphroditus with him, and he was truly horrified at the thought that he might die. Verse 27 is most revealing: God took pity not only on Epaphroditus (in other words, he recovered from his illness), but also on Paul, so that he wouldn’t have one sorrow piled on top of another. ‘Well, Paul,’ we want to say. ‘What was the sorrow you already had?’ Presumably he would reply: ‘Being in prison, and being unable to see my brothers and sisters in the Lord.’

‘Why couldn’t you let go of the sorrow and simply rejoice, as you’re telling us to?’ we might ask. ‘And how can you say that if Epaphroditus had died you would have been overwhelmed with that as a second sorrow on top of your first one? Wouldn’t you have wanted to rejoice that he’d gone to be with the Lord?’

Again he might reply: ‘I do rejoice, and I am rejoicing. I know that God has won the victory over the powers of evil, and that he will one day fill the world with his love and justice, raising us to new life in his final kingdom. That sustains me, and I celebrate it day by day. But at the same time I love my friends, especially those who work and struggle alongside me in the prayer and witness of the gospel. We are bound together by ties of real human affection and love.’

‘I’m not a Stoic,’ he would say. ‘I don’t believe that our human emotions are silly surface noise and that we should get down beneath them to a calm, untroubled state. That’s not what I mean by “joy”. The joy I’m talking about goes hand in hand with hope; it doesn’t mean that everything is already just as it should be, only that with Jesus now enthroned as Lord we know it will eventually get there. But if, while we’re waiting for that day, we pretend we don’t have human emotions — we pretend that we don’t need human emotions! — then we are denying part of what God has given us.’

We should not imagine, then, that the call to rejoice, which does indeed sound through the second half of this letter, is a call to ignore or forget the multiple human dimensions of our daily lives. After all, part of Jesus’ own path of humble obedience (2.6–8) was his weeping in agony both at his friend’s graveside (John 11.35) and in Gethsemane (Hebrews 5.7). Would we dare rebuke Jesus himself for failing to have a pure, untroubled joy at those moments?

Paul’s description of Epaphroditus, then, reminds us of the vital truth that we are all of us, whether first-century apostles or twenty-first-century converts, expected to be fully human beings, facing all that life throws at us and being honest about the results. Paul didn’t need or want to hide from the young church, from his own converts. He was not afraid to admit to his own vulnerability; that, indeed, is part of the whole point of 2 Corinthians, written most likely not very long after this letter. He believed, after all, in the Jesus who ‘was crucified in weakness, but lives by the power of God’ (2 Corinthians 13.4).

As for Epaphroditus himself: he, like Timothy, has followed the path laid down in verses 1–11. He, too, has not sought his own well-being, but that of others. He, too, has been prepared to lay down his life for the gospel. He, too, is a visible reminder of Jesus the king, the Lord.


Before closing out, let’s pray.

Gracious and holy Father, please give me intellect to understand you, reason to discern you, diligence to seek you, wisdom to find you, a spirit to know you, a heart to meditate upon you, ears to hear you, eyes to see you, a tongue to proclaim you, a way of life pleasing to you, patience to wait for you, and perseverance to look for you. Grant me a perfect end, your holy presence, a blessed resurrection, and life everlasting. Amen. (A Prayer from Benedict of Nursia)