***WARNING: This contains SPOILERS about NBC’s The Good Place—especially the series finale. If you haven’t seen it and want to, you’ll have to skip sections of today’s reflection. However, I will be really clear about where the spoilers start and stop. So you can hopefully skip only the spoiler sections and still enjoy some of this reflection. END WARNING***


Today’s mug is one of my oldest. I got this beauty off Etsy. 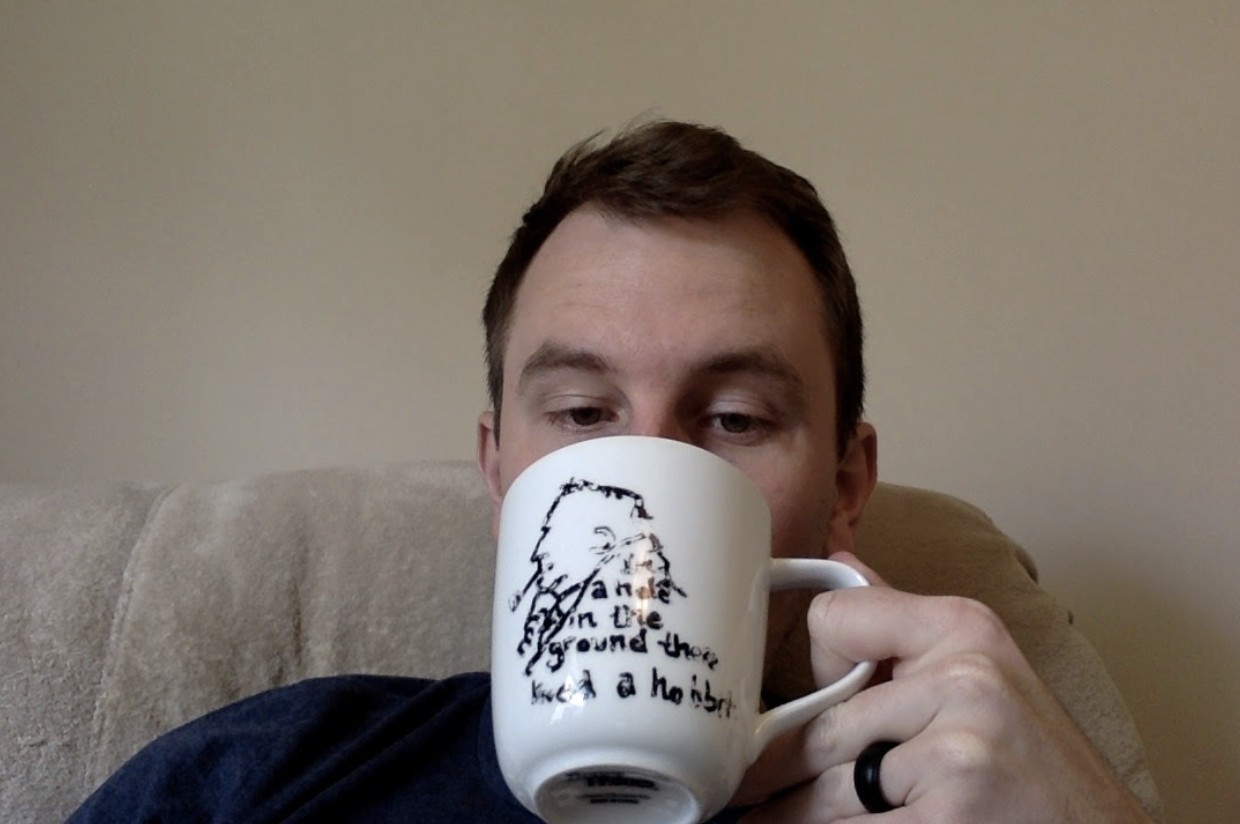 
The passage for today is,


13 Beloved, I do not consider that I have made it my own; but this one thing I do: forgetting what lies behind and straining forward to what lies ahead, 14 I press on toward the goal for the prize of the heavenly call of God in Christ Jesus. 15 Let those of us then who are mature be of the same mind; and if you think differently about anything, this too God will reveal to you. 16 Only let us hold fast to what we have attained.

I quote that here as if it were the fine print of a contract. You can’t get mad at me for what I’m about to do. I said I could say “whatever I want to say” about Philippians, so I’m going to. Today, I’m going to post an article I’ve written. I wrote it for fun, so since it doesn’t have a home other than my computer files, I thought I would post it here. Because of this, today is going to be a bit longer—but not too much longer! It was a fun article to write, and I hope it’s a fun one to read.

The article is about NBC’s sit-com The Good Place and the theologian Gregory of Nyssa. You might have noticed that I’ve quoted Gregory a time or two in 30 Days Through Philippians, but that’s because he is the theologian I’m working with the most in my dissertation. So he’s usually on my mind.

So how does this have anything to do with Philippians? Well, as you’ll see, my reflection on Gregory revolves mostly around his interpretation of a verse from today’s passage. In particular, the part where Paul writes “…forgetting what lies behind and straining forward to what lies ahead” (v. 13).

Here are a few different translations of this passage:


“straining forward to what lies ahead” (NRSV)

“straining toward what is ahead” (NIV)

“I’ve got my eye on the goal, where God is beckoning us onward—to Jesus.” (Euguene Peterson, The Message)


This “straining forward” is one word in Greek: epekteinomenos. It is largely on the basis of this word, really, that Gregory of Nyssa develops an interesting doctrine I discuss below.

REMEMBER… here be spoilers. I’ll clearly state where the spoilers start and stop.

Heaven Without God?: How a 4th Century Theologian Solves the Dilemma of NBC’s The Good Place


John Lennon’s famous song starts, “Imagine there’s no heaven, it’s easy if you try.” NBC’s hit sit-com The Good Placetried its own re-write: “Imagine there is a heaven, but there’s no God.”

Ironically, what the creators of The Good Place dream up is something like what is “Imagined” in Lennon’s song: a utopia where all the people are “just livin’ for today.”

This utopia is “the good place,” or place of the idyllic afterlife—what we religious folk call “heaven.” Yet, more than a story about heaven (and hell), it’s a story about five characters who try to find the path to betterment, the truth in morality, and the meaning in life.

When the four humans arrive, the good place isn’t all it’s cracked up to be. But they quickly realize they’ve been duped by Michael (Ted Danson), the architect of “the good place.” They are actually in the bad place masquerading as the good place, a device to torture them. The rest of the story is their quest, boosted by the conversion of Michael, to get to the real good place—and bring most, or all, of humanity along with them.

As the series winds down, they finally arrive at the good place only to find it’s not all it’s cracked up to be—again! This time they are in the real good place, but the architects are at their wits end trying to find a way to keep everyone happy for eternity. They trick Michael and the others into taking over their jobs of designing the good place.

The problem, they quickly realize, is boredom. It turns out a hedonistic paradise where you can have all you want, do whatever you want, and “just livin’ for today” is—in the literal sense—mind-numbingly dull. The humans craft what is branded as the most-human solution: end eternity. Give people a way out.

The reasoning behind this is simple: what makes our lives so special is the knowledge, usually stuffed somewhere in the back of our minds, that we are one day going to die. As Eleanor (Kristen Bell) put it, “vacations are only special because they come to an end.” Only when we know that time won’t go on forever can we find meaning in life and truly live now.

In the final episode—aptly titled “When You’re Ready”—the characters decide, after living for however many “Jeremy Bearimys” (a unit of time) they choose, when to go through a door which will permanently end their existence. They decide, in other words, when heaven has become fully and finally boring.


The dilemma The Good Place faces head-on is boredom in eternity.

On the one hand, a permanent end feels wrong. As C. S. Lewis pointed out, we have a built-in desire to live forever. We are made immortal beings, and in the economy of God death is an unwelcome, now defeated, interruption in our lives, not a final destination. In the final episode, Chidi (William Jackson Harper) makes the heart wrenching decision to walk through the door, but Eleanor isn’t ready. It turns out “happily ever after” gets old if you live long enough, but his decision doesn’t feel right or in any way satisfying—it feels sad.

On the other hand, the mind-bending concept that is “forever” is daunting because at some point there will be nothing new to experience. If “variety is the spice of life” then eternity will, inevitably, eventually be bland. However utterly humungous the sheer volume of activities available to humanity may be, eternity is longer.


[SPOILERS STOP: The “dilemma of the Good Place” refers to the possibility of boredom in heaven]


The dilemma of The Good Place is softened before God. Thankfully, the creators of The Good Place didn’t design eternity, but an all-powerful, all-knowing, perfectly good, perfectly loving God did. The “architect” isn’t a fallible creature bumbling his way to entertaining humans, but the God of Abraham, Isaac, and Jacob revealed most fully in Jesus Christ. Heaven is not a hedonistic paradise, but being in the presence of the end of all good desires.

Yet a shadow of this dilemma remains for many Christians.

If we are honest, most of us have felt this uneasiness about eternity. We know we’re made for it, but we aren’t sure we want it. In the end, these will prove to be minor scruples before the face of God, but they are worrisome here because we can’t grasp what eternity will consist of. We literally can’t imagine how an eternal heaven will avoid boredom.


In fact, the question of boredom in heaven is an old one. The 3rd century theologian Origen of Alexandria actually speculated that the first fall of the spirits from heaven was due to boredom.

Enter Gregory of Nyssa. The 4th century church father from Cappadocia (present day Turkey) was called “the Father of Fathers” by the 7th Ecumenical Council. He was a defender of the orthodox faith during debates about the divinity of Jesus and the Holy Spirit.

In one of his more interesting theological moves, Gregory articulated a doctrine called epektasis. It’s a Greek word that means “moving ahead” or “making progress.” He references the Apostle Paul, who wrote: “this one thing I do: forgetting what lies behind and straining forward to what lies ahead” (Philippians 3:13). In Greek, the “straining forward” is a form of the word epektasis.

Generally, Christians tend to think of the Christian life on earth as a kind of epektasis—a straining forward or moving ahead. Our lives are ones of moral improvement, spiritual growth, and most importantly a deepening relationship with God and others. Yet, for many, this epektasis is temporary—we grow and grow until we are fully and finally in the presence of God.

However, Gregory extended this into eternity.

For him, the reason for epektasis is simple: God is infinite. While many affirm it, few appreciate the implication. It means there is truly no end to God—temporal or spatial limitations are nonsensical next to him.

From this, Gregory reasons that there is no such thing as being fully and finally in God’s presence. There is always more to God than our minds, hearts, souls, and bodies can comprehend, feel, experience, or be in the presence of. He says God desires for us “unending growth” for an “ascent into higher things.”

As Gregory sees it, heaven can never be static. It is precisely eternal growth into God. We are ever receiving more and more of what God is offering who, because of his infiniteness, can infinitely give himself to be known and received by us. We are “glorified” says Paul (Romans 8:30), but we have never finally reached the summit of perfection. Instead, our moral and spiritual lives are best understood as a constant growth in the participation of an infinite God.

Long before Chidi and Eleanor, Gregory of Nyssa faced the possibility of boredom in eternity. His solution wasn’t to focus on the happiness of man, but to focus on the infinite goodness of God. In epektasis, he gave us a way to think of heaven where the problem of boredom is washed away by eternal streams of living water.

God is, in a truly literal sense, never-ending. We will never cease to be delighted by him as we grow, by our participation in him, into an eternal perfecting.

The Good Place offers a vision for heaven that is ultimately unsatisfying because God is not at the center. A more compelling vision is offered by C. S. Lewis in Narnia. In The Last Battle, Jewel the unicorn “summed up what everyone was feeling” as they enter Aslan’s country,


“I have come home at last! This is my real country! I belong here. This is the land I have been looking for all my life, though I never knew it ‘till now…Come further up, come further in!”


As Gregory argues, a heaven with an infinite God at the center is an eternally satisfying one. You will go further up and further in to the life of God in all of the Jeremy Bearimys …and more.