Before we get going, there is an important announcement. It is April 6th, which means it is my wife, Bethany’s, birthday! Here she is standing in some old ruins… 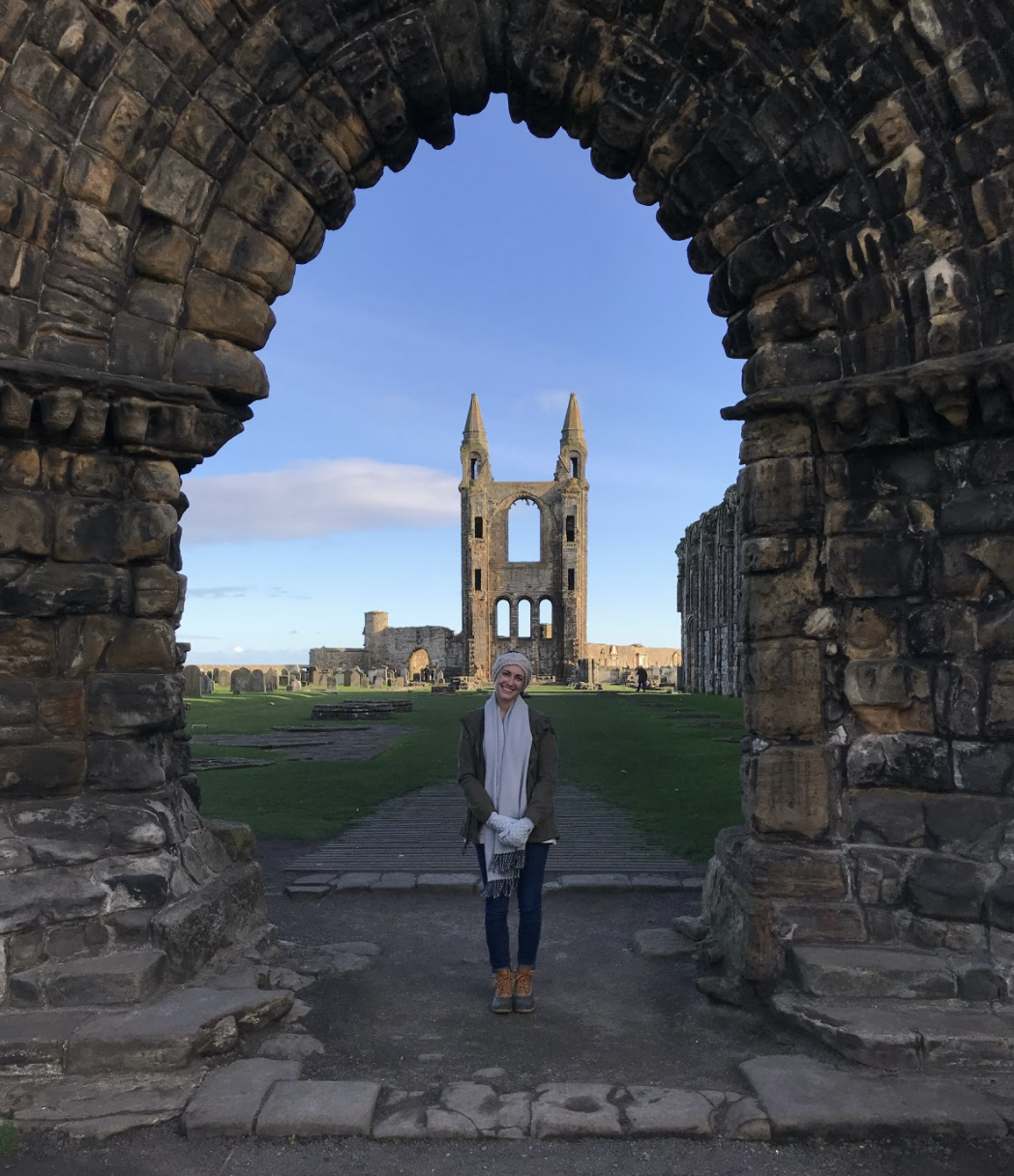 She’s going to hate that there is a picture of her here, but there’s nothing she can do about it. If you know her, wish her a happy birthday today! Also, a birthday shout out to her identical twin sister, Brittany!

This morning, I’m sipping from this mug. 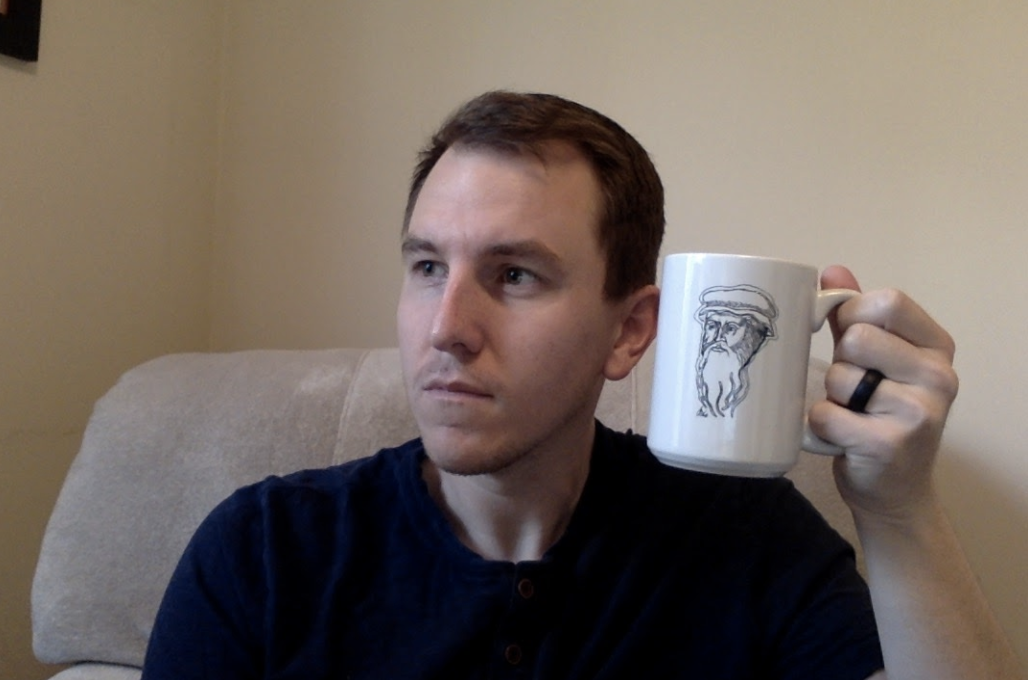 That beautiful face you see (no, not that one, that’s me… the one on the mug) is Scottish reformer John Knox. Knox lived in the middle of the 16th century, in the throes of the reformation. After studying under John Calvin in Geneva, he returned to Scotland to preach—and he was a fiery preacher.

In fact, he once gave a sermon that was so rousing, those listening felt compelled to violently destroy any Roman Catholic symbols they could find. A group, or I guess more accurately a mob, marched about 300 yards down the street and destroyed the Catholic cathedral in town. The ruins of that cathedral, in fact, can be seen above behind the picture of my wife.

Fun fact: you can visit Knox’s gravestone today in downtown Edinburgh… in the middle of an active parking lot. 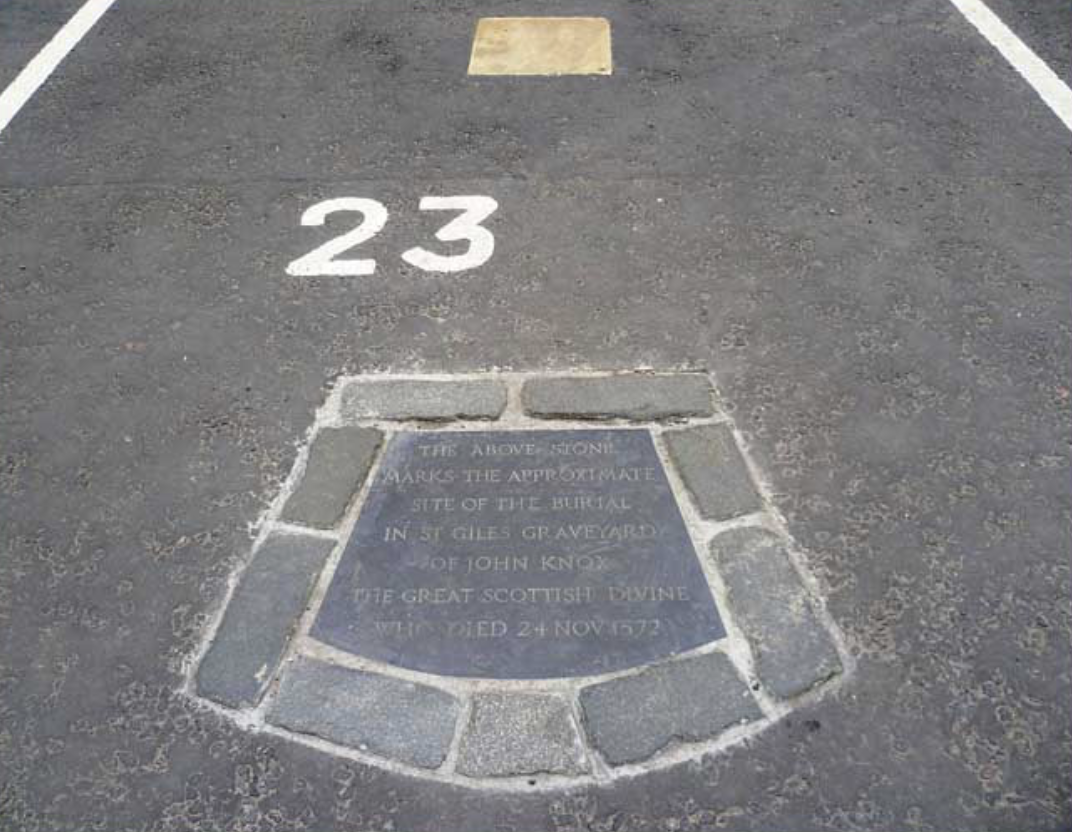 For all his controversial behavior and preaching, Knox remained a faithful minister and preacher of the word of God. Today, he is remembered as the founder of Presbyterianism, which has millions of members worldwide. He once said, “the Scriptures of God are my only foundation and substance in all matters of weight and importance.”

With that, let’s jump into today’s passage. Paul writes,


“Some proclaim Christ from envy and rivalry, but others from goodwill. 16 These proclaim Christ out of love, knowing that I have been put here for the defense of the gospel; 17 the others proclaim Christ out of selfish ambition, not sincerely but intending to increase my suffering in my imprisonment. 18 What does it matter? Just this, that Christ is proclaimed in every way, whether out of false motives or true; and in that I rejoice.

Yes, and I will continue to rejoice, 19 for I know that through your prayers and the help of the Spirit of Jesus Christ this will turn out for my deliverance.


We don’t really write letters anymore, so it can be difficult to contextualize this. But imagine you did have to write letters. And imagine that recently, some major issues had cropped up for you—say, you lost your job and a serious sickness was spreading through your town. Your friends know what’s going on, too. So if you wrote them a letter, you’d have to bring it up. It’s kind of like the elephant in the room. You know they know, and since they care about you, they want to hear from you how things are.

The situation is (somewhat) similar for Paul. In the few verses before (v. 12-14), he talks about the experience of being in jail. In today’s passage, he’s talking about a different trial: there are some who are preaching Christ “out of envy and rivalry.”

We’re not exactly sure who is preaching what, but the Philippians were aware of whatever Paul is talking about. Some have speculated that there was a rival Christian group preaching something different, but I think N. T. Wright is right,


“But I think it’s more likely that they are ordinary pagans who have heard what all the fuss is about and are talking about it on the street.

‘Have you heard?’ they’ll be saying to each other. ‘They’ve caught that strange fellow who’s been going around saying there’s a new king — a new emperor! And you won’t believe it — this new king turns out to be a Jew whom they crucified a few years ago, and this jailbird is saying he’s alive again and he’s the real Lord of the world!’

Talk like that would be guaranteed to make people feel that Paul was a dangerous lunatic who should be kept locked up.”


This fits well with what Paul has written: the motive is wrong, but not the message.

I commonly hear this passage misused. As we know, there are many today with all sorts of “Christian” messages. Most of these are terrible distortions of the gospel. I won’t name names, but preachers and teachers like these are especially dangerous—their message uses Christian language, and may even talk a lot about Jesus, but teaches something fundamentally different than what Christ himself taught.

Some Christians shrug their shoulders and say, “oh, well, at least Christ is preached,” referencing this passage.

But, it seems to me, our conclusion from this passage should be the exact opposite. The important part, for Paul, is that Christ is preached. These folks got the message right, but they got the motives wrong.

The message matters, and this passage does not give us warrant to shrug our shoulders when a different gospel is preached.

In fact, it is paramount that the message is right (even if the motives are wrong). In Paul’s thinking, the message can overcome the motive. He isn’t all that worried about incorrect motives, and why? Because of the power of the message. Rightly proclaimed, the message of Jesus has a power that extends well beyond the speaker. Even if it was just some bumbling pagan, hoping to cause more trouble for him, Paul still rejoices: because he knows the power of God is greater than the power of that pagan. A perfect message can still come through (very) imperfect mouths.

This is good news for us.

Most of us aren’t preachers like Paul or John Knox, but we still preach the message. With our words and lives, we are responsible—just as much as Paul, Knox, or the pastor of your church—for the spread of the gospel.

We shouldn’t conclude from this passage that motives don’t matter, however. Hopefully we do preach Christ with, as Paul says, goodwill—not out of rivalry and envy. But if we’re honest, this isn’t always easy. Maybe we’re a part of a Christian community where it’s expected, or we do it because it’s what we’re “supposed” to do, or maybe truly out of “selfish ambition”: we want to show others how good we are at evangelism or preaching or teaching.

Pray now, for our hearts, that they exhibit goodwill, and not envy or rivalry.

This passage from Philippians today is a great comfort because—thanks be to God!—the message of the gospel is not slowed down by our imperfect motives.