Happy Good Friday, all! I’m starting my morning out with a cup of coffee from this mug from Drinklings coffee. A shout out to Drinklings—it’s a small coffee shop in Wilmore, KY but they also make cool mugs like this one! And you should check them out. 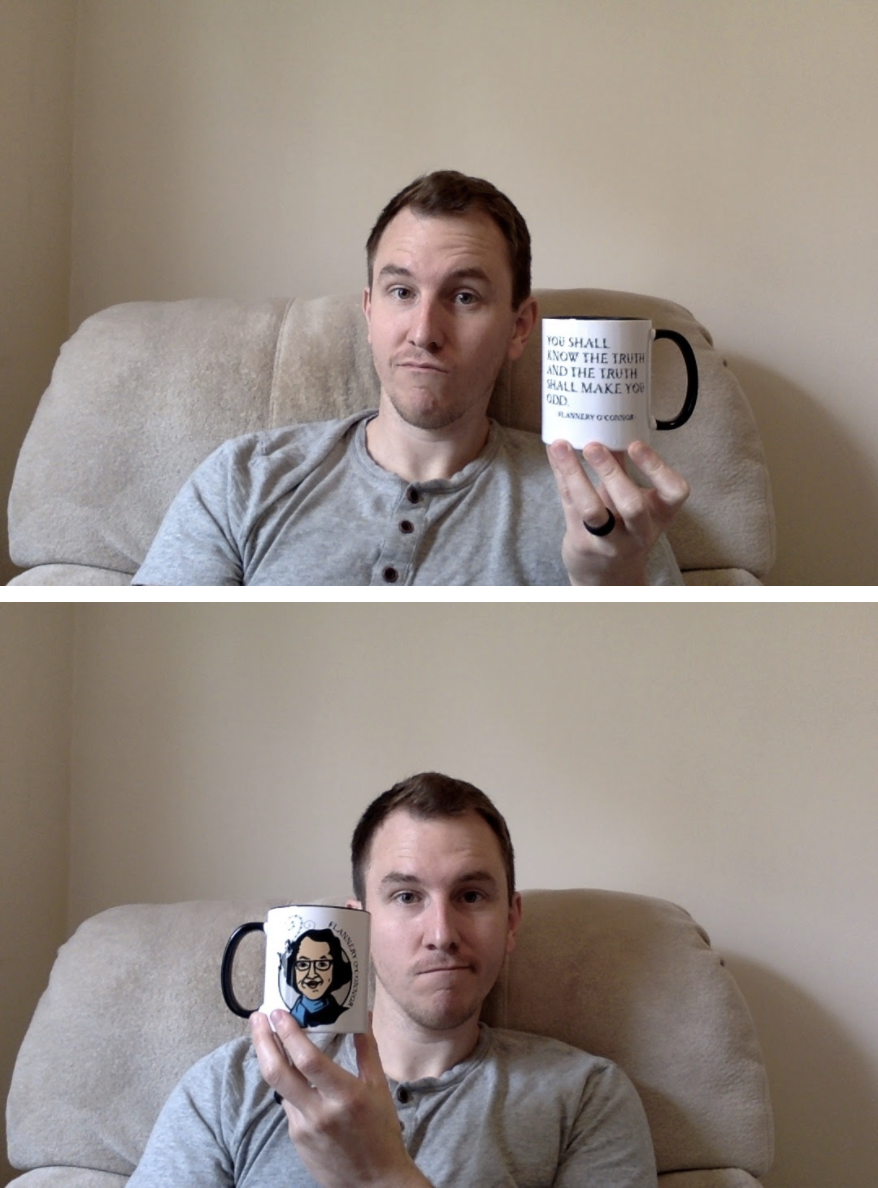 The mug has a picture of fiction author Flannery O’Connor. The quotation, from O’Connor, says: “You shall know the truth, and the truth shall make you odd.” I’ve read a little bit of Flannery (although not as much as I’d like), but the real reason I have this mug is because I bought it as a gift for a friend… but he already owned it. Womp womp.


Folks, today is Good Friday. Traditionally, Good Friday is the day the church remembers the crucifixion and death of Jesus Christ—just before Easter Sunday, when the church celebrates Christ’s resurrection and defeat of death. Today’s passage is about… the crucifixion and death of Christ. This upcoming Monday’s passage, the day after Easter, is about… the exaltation of Christ. I wish I could say I meticulously planned it this way, but, alas, I did not. We’ll just call it a little gift from God that it lined up like this!

From the prayers I’ve posted so far, you’ve probably learned by now that I enjoy the Book of Common Prayer. This book dates back to the English Reformation in the 16th century. I’ll spare you the history lesson (for now), but in short it’s kind of like a worship hymnal for the Anglican church. Yet, Anglican or not, the prayers and services in this book have been used and appreciated by Christians of all denominations (if you have the time, read the wedding service in the BCP…it will sound familiar).

Today, I want to do a very abbreviated, and very edited, walk through the BCP Good Friday service, centering it around our passage in Philippians. Everything in italics is an instruction or something for you to say (aloud if you can) or Scripture; everything in bold is a prayer.

As you pray through this, remember that you do not pray alone, but with literally millions of Christians—past and present—who are celebrating Good Friday with you.

Almighty God, we beseech you graciously to behold this your family, for whom our Lord Jesus Christ was willing to be betrayed and given into the hands of sinners, and to suffer death upon the Cross; who now lives and reigns with you and the Holy Spirit, one God, for ever and ever. Amen.

Let the same mind be in you that was in Christ Jesus,

6 who, though he was in the form of God,

did not regard equality with God
as something to be exploited,

taking the form of a slave,
being born in human likeness.
And being found in human form,

and became obedient to the point of death—
even death on a cross.


These verses (along with v. 9-11) have long been of special interest to Biblical scholars. You may notice in your Bible that they are formatted differently than the rest of the text. That’s because they are structured like a poem or a hymn. While the fine historical details need not concern us here, many scholars think it’s possible—if not probable—that Paul is quoting an early Christian hymn in this passage.

As you can see in this snippet of a timeline (plotted with some other NT letters), Philippians was likely written sometime in the late-50s or early 60s. 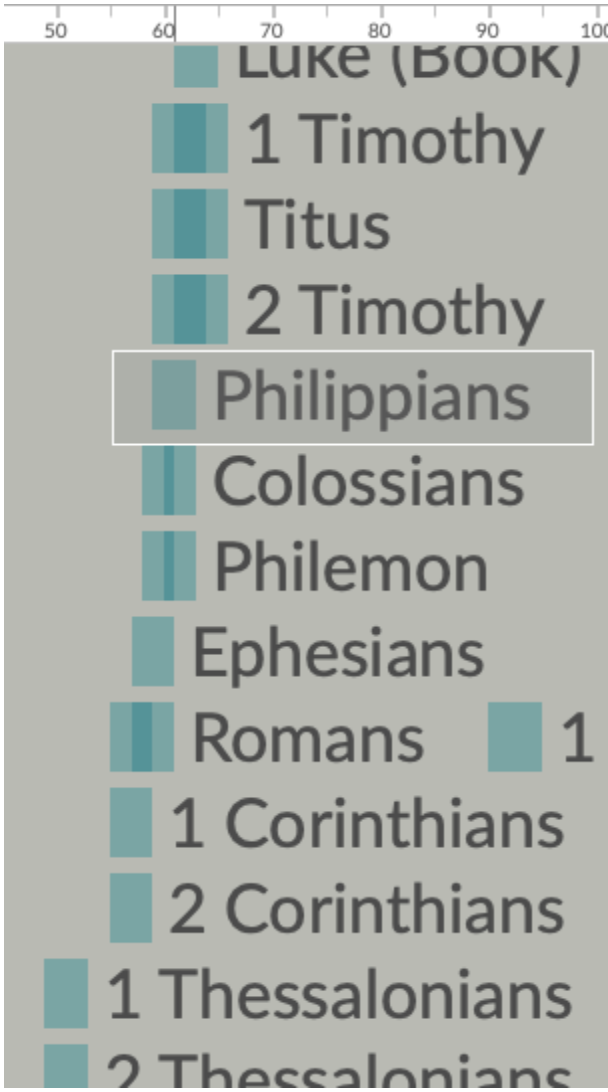 If Philippians 2:5-11 truly is an early Christian hymn or poem that Paul is quoting, it would have to be dated before then—and likely well before. It’s possible that this poem—along with a similar one in Colossians 1:15-20—is the earliest piece of Christian writing (hand written or not) that we have today. It should not be surprising, then, that the message of Jesus is central. However, even if this is a pre-existing hymn or poem, it still has a place in Paul and he still is integrating it into his thinking. So I’ll continue to say “Paul says this or that” in reference to it.

He begins by imploring his hearers to have the same mind as Christ Jesus. But he’s done something interesting here: just a few verses earlier (Phil. 2:2), he’s told the Philippians to be of “one mind.” The word he uses for mind (phroneō in the Greek, for those wondering) is the same here as there.

These verses are packed with theology. They are particularly packed with statements about the nature of Jesus Christ. It’s no surprise, then, that these verses would later prove to be fertile ground in debates about the person and work of Jesus Christ. I’ll spare you the theological minutiae, but the church ultimately came to affirm the following doctrines about who Jesus is, based at least in part on their reflection on these verses:


Jesus Christ is fully man and fully God. He is “true God from true God.” He has both a divine nature and a human nature.


It would probably surprise you to learn how much ink has been spilled over even just those few statements, but the reason why is not because theology is fun (although it is). The reason, as the early Christians saw—and as Paul surely saw it—is that who Jesus is matters for if and how we are saved.

Christian’s have always affirmed that Jesus is unique. He is none other than God himself, but he has assumed a human body. And in that human body, he took the brunt of evil—on behalf of humanity—for the sake of humanity. He submitted to death…even death on a cross!

Since Jesus was acting on behalf of humanity, it is important that he really is a part of humanity. Christians have always insisted that Jesus is “fully man” because, if he’s not, his divinity remains apart of our humanity. A 4th century theologian, Gregory of Nazianzus, articulated this important principle: “what is unassumed is unhealed.” What he meant by this is that Jesus had to become fully human for us to be saved. Jesus wasn’t just a half-man or sort-of-man. He wasn’t God in a man suit. He really became (that’s the word in John 1:14) flesh for us.

In fact, in this passage Paul says that Jesus is the form (the Greek is morphē) “of God,” but only a few verses later says he took the form (morphē, again) “of a slave.” According to Paul, Jesus Christ is a slave just as much as he is God!

This act of God becoming man—and not just a man, but the lowest rung of mankind, a slave—is the ultimate act of humility. As Paul describes it here (v. 8), Christ “humbled” himself. Importantly, this does not mean having low self-esteem, like some Christians today wrongly imagine. It means literally a loss of status. Christ was willing to lose status for the sake of others.

The culmination of this loss of status was, of course, death. And not just any death, but a particularly humiliating (literally so) form of death: death on a cross. As an early Christian pastor, Epiphanius, put it, “He went to his death so that by death he might put death to death.” But let’s not get ahead of ourselves…

Finally, we should recall what Paul said at the beginning of the passage: this is all a challenge for us to have the same mind of Christ Jesus. This is not just theology, but a way of life. The life of Jesus is, for us, the path we are to follow—and it is often a humiliating one. In the most literal sense possible, we should be willing to undergo a “loss of status” for the sake of others and submit to our daily death as we put others’ needs above our own.

But we also recognize how imperfect we are at this. That’s what is so wonderful about the cross.

Good Friday is, then, a day where we remember our sins and bring them to the foot of the cross. We remember where we have failed, and we ask for forgiveness. That is at the core of the cross, and all are invited to join.

Keep silence and ask for forgiveness from God.

Almighty God, Father of our Lord Jesus Christ, maker and judge of us all: We acknowledge and lament our many sins and offenses, which we have committed by thought, word, and deed against your divine majesty, provoking most justly your righteous anger against us. We are deeply sorry for these our transgressions; the burden of them is more than we can bear. Have mercy upon us, Have mercy upon us, most merciful Father; for your Son our Lord Jesus Christ’s sake, forgive us all that is past; and grant that we may evermore serve and please you in newness of life, to the honor and glory of your Name; through Jesus Christ our Lord. Amen.

Lord Jesus Christ, Son of the living God, we pray you to set your passion, Cross, and death between your judgment and our souls, now and in the hour of our death. Give mercy and grace to the living; peace and rest to the dead; to your holy Church unity and concord; and to us sinners everlasting life and glory; for with the Father and the Holy Spirit you live and reign, one God, now and forever. Amen.

Grace and peace to you on this Good Friday and for this Easter weekend. See you on Monday!